IHS reported the large-sized LCD displays in March reached a total shipment area of 11.3 million square meters, a metric showing the expanse of shipped panels during the period and distributed among the panels’ four major applications for TVs, notebooks, monitors and tablets. In comparison, production area measuring the spread and breadth of manufactured panels equated to 11.0 million square meters—approximately 340,000 square meters less than the total shipment area.

“March represented the first time in four months that shipments outpaced production for large-sized LCD panels,” said Ricky Park, senior manager for large-area displays at IHS. “The last time the same phenomenon took place—when shipment was higher than production—occurred in November 2012, an understandable occurrence as manufacturers raced to pump out more displays in time for the December holiday season and Lunar New Year holiday season in China. In March, panel suppliers applied the same tactic to chip away at creeping inventory, the upshot of shipments falling below production levels from December 2012 to February 2013.”

Other points shared by IHS on large size LCD display market:
After March, however, the current dynamic took a different turn. Pending final figures, forecasts show that production would catch up to shipments starting in April as both indices reach 11.0 million square meters, with production then exceeding shipments beginning in May. The new movement starts as the industry ramps up for the higher demand anticipated in the second half of this year. 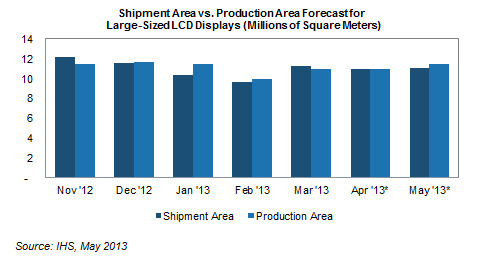 Calculated efforts pay off
For all the vicissitudes of the market, panel manufacturers need to continually negotiate a delicate balancing act—between making sure there is enough inventory, and preventing the inventory at hand from ballooning and crossing into dangerous oversupply. A potent weapon in their arsenal is to turn the screws on production, intentionally limiting manufacturing capacity in fabs, while continually shipping out panels taken from both current assembly and leftover inventory in their possession. Constant vigilance is required in an industry where oversupply is usually the norm, with panel manufacturers always striving to perfect their game.

Utilization rates are also adjusted to achieve targets. In March, utilization rose to 80 percent from 72 percent in February, but the pace of fabrication remained lower than was originally intended, estimated at 82 percent and consistent with the plan to keep production lower than shipments. Fab utilization rates were expected to remain unchanged in April and then jump to 83 percent in May—again in keeping with plans for production to start growing and overtake shipments.

Even so, panel manufacturers are not expected to exceed 85 percent utilization and risk producing more than the channel can swallow. Inventory has been particularly problematic because of slow demand, but manufacturers are also careful that pricing doesn’t drop further even with anemic demand plaguing the system.

The reason for such disparate movements is not hard to guess. Monitors and notebooks have been under a cloud for some time, overshadowed among consumers by more appealing devices like smartphones and tablets. TVs, while a mature commodity in advanced markets like the United States, Europe and other highly industrialized countries, continue to enjoy increasing demand in the vast China market, compensating for any losses that may occur elsewhere.

Tablets are in even more fortunate circumstances. The devices continue to shine with blockbuster sales, their powerful status also demonstrated in unbeatable panel shipment numbers.