IC Insights have reported from its latest study the fabless semiconductor companies have outpaced Integrated Device Manufacturers (IDM) in revenue growth in all the years from 1999- 2012, except 2010.

Here below is the latest analysis from IC Insights on comparison of fabless vs IDM
Fabless company IC sales increased more than 3x the rate of the total IC market from 1999-2012. 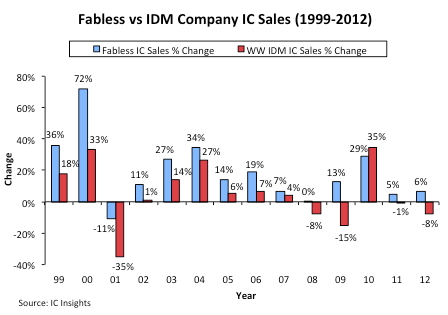 Since very few fabless IC suppliers participate in the memory market, they did not receive a boost from the surging DRAM and NAND flash memory markets in 2010, which grew 75% and 44%, respectively. Another reason for the relatively poor showing by the fabless IC segment in 2010 was that some of the large fabless IC suppliers like MediaTek and ST-Ericsson registered growth that was less than half the total 2010 IC industry average.

Figure 2 compares fabless-company IC sales to IDM-company IC sales since 1999. As shown, the 1999-2012 worldwide IC market displayed a modest 5% average annual growth rate. In contrast, total IC sales from the fabless IC companies during this same timeframe registered a very strong 16% CAGR, more than 3x the total IC market rate. As a result of this trend, fabless IC company sales increased more than 7x from 1999 to 2012 whereas the total IDM IC market was up less than 50% over this same timeperiod. Moreover, the IDM companies’ IC sales in 2012 were only 7% greater than they were 12 years earlier in 2000 and less than they were five years ago in 2007. 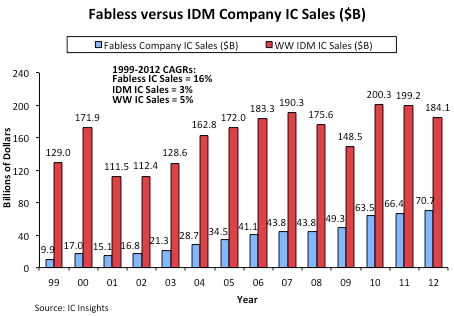 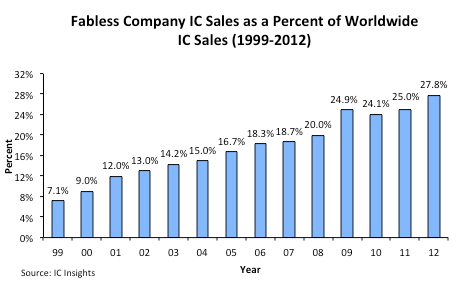 IC Insights forecasts that, in 2017, fabless IC companies will command at least one-third (33%) of the total IC market, especially if more large companies like IDT, LSI, Agere, and AMD become fabless over the next five years. Over the long-term, IC Insights believes that fabless IC suppliers, and the IC foundries that serve them, will continue to become a stronger force in the total IC industry.