IHS says the Top 10 vendors of semiconductor devices for industrial market accounted for revenue amounting to $12.19 billion, or 40.4 percent of the overall industrial electronics semiconductor space valued at $30.15 billion. IHS ranks Texas Instruments at the top, which managed to stay on top despite deteriorated revenue. The revenue also fell for the remaining top 8. Only two entities within the circle enjoyed revenue increases, as the markets they supplied were growth areas within the broader industry, according to IHS. 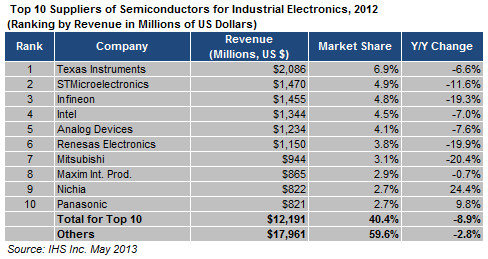 “The industrial electronics semiconductor industry as a whole contracted 5.4 percent in 2012 following a slowdown in worldwide markets where the chips are used, such as in security, test and measurement, motor drives, metering, medical electronics and renewable energies,” said Jacobo Carrasco-Heres, analyst for industrial electronics at IHS. “The anemic performance of these segments, in turn, dragged down the suppliers making the chips, resulting in 2012 revenue losses among the Top 8 that ranged from 0.7 percent to 20.4 percent.”

Further details of analysis shared by IHS:
Texas Instruments remained at the pinnacle with $2.09 billion in revenue, even though it was down 6.6 percent for the year. TI did well in medical electronics and in the building and home control market, but was negatively affected by poor demand for motor drives and automation equipment. A bad year for wind and solar energy also pummeled TI in the energy distribution and generation segment.

French-Italian maker STMicroelectronics returned to the No. 2 spot last year after losing to Germany’s Infineon in 2011, which fell to third place again. STMicroelectronics had revenue of $1.47 billion, down 11.6 percent; compared to Infineon’s $1.46 billion, down a much larger 19.3 percent. Both companies saw their revenue retreat on various fronts, but each one saw growth in the lighting segment of the building and home control market.

Both suffered reversals in the 7 to 8 percent range for the year.

The occupants of the sixth and seventh spots encountered the largest revenue fall within the group.

No. 7 Mitsubishi of Japan went down 20.4 percent to $944 million, while No. 6 Renesas Electronics of Japan did only slightly better with a 19.9 percent decrease to $1.15 billion. Contractions in the motor drive segment shrank the revenue of the two companies in the manufacturing and process automation market.

The final entity in the Top 10 not to post growth last year was No. 8 Maxim Integrated Products, flat at $865 million.

The two gainers in the Top 10 were Nichia and Panasonic, both from Japan. Nichia flew into the charmed circle all the way from No. 16, thanks to its involvement in light-emitting diodes (LED) for general lighting. Nichia’s revenue reached $822 million, up a mighty 24.4 percent. For its part, Panasonic came in after spending 2011 at No. 11, with growth last year of 9.8 percent to $821 million, on the back of high-performance segments such as security cameras and medical applications.

Among those that fell out of the Top 10 last year were NXP Semiconductors of the Netherlands, down from No. 9 in 2011; and Xilinx of the United States, down from No. 10.

Power-supply
Smart meter shipments to reach above 100 million units in...