IHS iSuppli says global revenue in 2013 for combo inertial sensors used in motor vehicles will reach a projected $163 million, up a notable 77 percent from $92 million last year. The anticipated increase continues a hot streak for the market, which saw a phenomenal 338 percent surge last year from just $10 million in 2011. 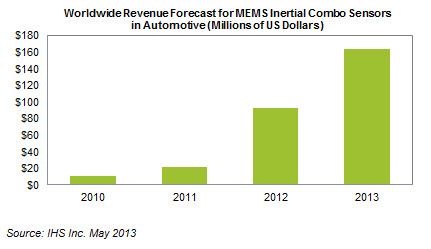 “ESC systems are mandated in North America, Europe and in other areas where the edicts are maturing, such as Australia, Japan, Canada and South Korea,” said Richard Dixon, Ph.D., principal analyst for MEMS & Sensors at IHS. “But a huge growth opportunity exists in untapped territories like China, which would significantly impact the penetration of ESC worldwide given the vast size of the Chinese market. Such gains, in turn, would provide tremendous impetus and momentum for automotive combo sensors overall.”

Why combos?
Three architectures are currently possible for ESC systems in cars: on a printed circuit board as a separate ESC engine control unit (ECU); attached to the brake modulator to save cabling; or collocated in the airbag ECU. Of these three usable locations, the current trend favors placing ESC systems in the airbag ECU to achieve a smaller footprint and greater efficiency, given that there is a space constraint for the ECU in this position near the cup holder in a vehicle, which favors an architecture of reduction.

All told, as much as a fivefold reduction in space could be achieved for the sensors in a combo-sensor ESC system made by a manufacturer like Continental, compared to the same accomplished via separate sensors.

A non-combo solution also exists in the form of the sensors separately mounted on the printed circuit board. But deploying the sensors in a combo form factor saves not only on packaging cost but also on expensive real estate for the semiconductors being used, since the two sensors in the combo package share the same application-specific integrated circuit.

Cost is a factor
A paramount issue for ESC systems is cost. Cost is especially important because ESC formerly was considered an optional feature—but since being mandated by governments—it now has attained the same required status as the seat belt.

As a result, the entire supply chain and price structure for automotive combo sensors has been experiencing huge pressure, exerted from car makers down the chain. Tier 1 companies then pass on this pressure to their suppliers, accounting for the accelerated move to provide efficient combo sensor solutions for inertial sensors in the system.

Because of such pressure, some top-tier companies have indicated that only legacy businesses will use older arrangements featuring separate sensors—not a combo solution—on a printed circuit board in the future. All new car models will use combo sensors.

Top suppliers identified
The major suppliers of automotive combo inertial sensors are Bosch of Germany and Japan’s Murata (formerly VTI). Two other potential manufacturers, Panasonic of Japan and Massachusetts-based Analog Devices, will need to develop similar solutions to have a chance in the market.

For its part, Panasonic has indicated that a product will be available by 2014. Panasonic Industrial makes the gyroscope part of the solution, while Panasonic Electric Works makes the accelerometer component.

However, the two entities do not have a good track record of working together, so it remains to be seen how soon a unified combo sensor solution from Panasonic will come to market.

Meanwhile, Analog Devices is divulging little information, but it will almost certainly develop a combo sensor solution, IHS iSuppli believes, based on an analysis of developments surrounding the competition.