“The continued consolidation of solar PV manufacturers is creating opportunities for the leading tier 1 module suppliers,” explained Ray Lian, Senior Analyst at NPD Solarbuzz. “The market share of the top 20 module suppliers increased significantly in Q1’13 to 70%, up from 58% in Q1’12.”

“The top 10 Chinese suppliers have been less successful in countries where there is strong competition from domestic module suppliers or attractive solar PV policy incentives,” added Lian. “In the US and Japanese solar PV markets, for example, local manufacturers still rank at the top for domestic PV module shipments.”

Over the last four quarters, US based manufacturers First Solar and SunPower were the leaders in module shipments to the US market. In Japan, leading domestic PV module suppliers Sharp, Kyocera, Panasonic, and Solar Frontier also outperformed Chinese competitors during the same time period.

Solar PV module supply to the US and Japan is contrasted by the dominance of tier 1 Chinese module suppliers in European countries, emerging solar PV regions, and in China and Australia. Over the past four quarters, for example, almost 50% of modules shipped to the Australian PV market have been supplied by a small group of tier 1 Chinese manufacturers led by Trina Solar, followed by Renesola, Suntech, China Sunergy, and Canadian Solar. 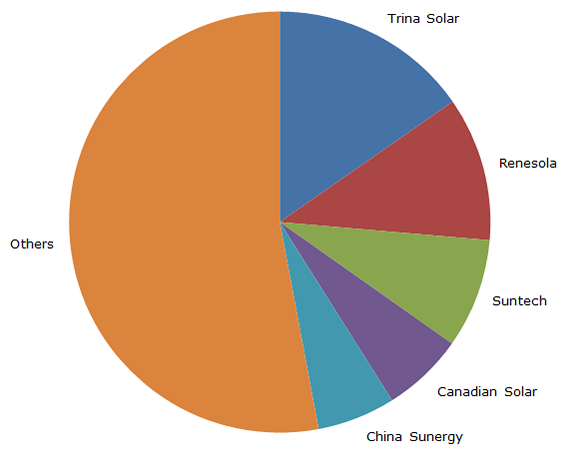 Leading European tier 1 PV module suppliers, such as Conergy and SolarWorld, continue to target European and North American PV markets that are characterized by brand recognition and higher pricing levels. However, this strategy comes at the expense of global penetration, as their market share within the top 20 module suppliers declined from 10% in Q1’12 to 7.5% in Q1’13.

While solar PV module pricing levels continue to vary across the key solar PV end-markets, the average sales price for the top 20 tier 1 suppliers showed signs that it was stabilizing at $0.76/Watt in Q1’13. This compares to $1.03/Watt in Q1’12.

“The stabilization of module prices during Q1’13 was driven mainly by a geographic shift in demand from end markets during the quarter, with strong demand from higher price countries such as Japan preventing further global declines,” added Lian. “However, pricing continues to vary considerably among different countries and for the various module technology types being supplied.”

Trade disputes and domestic manufacturing incentives are creating import restrictions across a range of PV end markets, so supplier market share and country specific pricing levels will increasingly dominate the global strategies being rolled out by leading tier 1 module suppliers for the remainder of 2013.