Market researcher Yole Dévelopement has said in its release " The fast growing market for sensors for smart phones is re-shuffling the ranks of MEMS suppliers. For the first time, suppliers of inertial sensors have surpassed the major makers of micro mirrors and inkjet heads that have long dominated the industry"

Yole finds STMicroelectronics increased MEMS sales by ~10% in 2012, to become the first company with $1 billion in MEMS revenue, moving past Texas Instruments to become the sector’s largest company. Robert Bosch saw 14% growth, to ~$842 million in MEMS sales, pushing ahead of both Texas Instruments and Hewlett Packard for the first time to become the second ranking player, according to Yole’s figures. Yole says both ST and Bosch have been aggressively expanding their consumer product lines to offer customers a broad range of sensors, and increasingly also combinations of sensors in a single package for easier integration at lower cost. Their growing volumes also help keep their fabs running more efficiently, for the assured manufacturing capability that volume users demand, adds Yole. 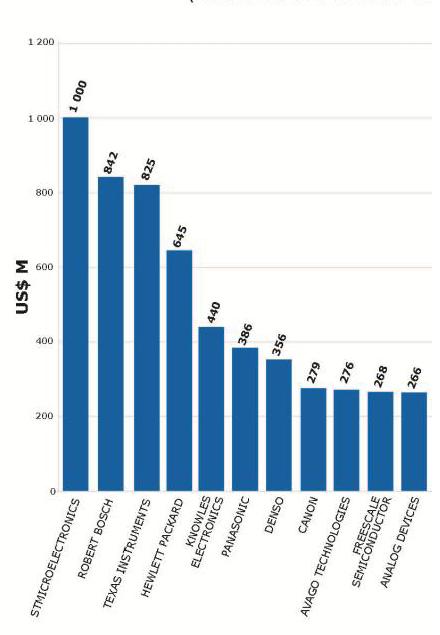 Source: Yole Development (Click on the image above for the full picture)

The other findings and analysis reported by Yole in its latest release includes:

ST, Bosch and other major inertial sensor suppliers saw strong revenue growth despite the 20%-30% drop in average selling prices for accelerometers and gyroscopes over the year--because of even bigger ramps in unit volume. “ST increased unit production by 58%, to 1.3 billion MEMS devices in 2012, up to some 4 million units a day—not counting its foundry business,” notes Yole Market & Technology Analyst, Laurent Robin. “It’s hard for many companies to match that.”

Yole calculates the MEMS industry overall saw another ~10% growth in 2012 to become an ~$11 billion business-- in a year when the semiconductor industry saw a ~2% decline. The Top 30 companies account for nearly 75% of that total MEMS market.

The traditional gap between the big four MEMS makers and the rest of the pack narrowed this year, as strong demand for more MEMS sensors in both consumer and automotive markets drove strong growth across a range of suppliers. Knowles Electronics saw better than 20% growth to climb into fourth place with some $440 million in revenues from MEMS microphones, closing in on HP. Panasonic and Denso were close behind with more than $350 million in MEMS sales in their largely automotive markets.

Mobile phones and tablets were the real sweet spot for big growth opportunities though. Chinese electret microphone supplier AAC made the top companies ranking for the first time as its MEMS microphone sales jumped ~90% to ~$65 million, as it became the second source for the iPhone. InvenSense saw some 30% growth as it ramped up production of its inertial sensors. Triquint saw a 27% increase in revenues from its BAW filters.

Murata moved sharply up the ranking as its acquisition of VTI created ~$179 million in combined MEMS revenue.
Meanwhile, the traditional major MEMS markets for micromirrors and inkjet heads have matured and slowed, with demand for inkjet heads particularly hit by the consumer printer market’s rapid turn away from replaceable heads to page-wide and fixed-head technologies. That hit revenues at both the inkjet companies and their manufacturing partners.

Note by MEMS on its analysis: Yole defines MEMS as three dimensional structures made by semiconductor-like processes, with primarily mechanical, not electronic, function. We also include magnetometers, as they are now so closely integrated with MEMS inertial sensors, and all microfluidics, including those on polymer. We figure MEMS units and value at the first level of packaged device. For companies that do not release MEMS revenues, we estimate the figures based on our data for product market size, market share, product teardowns, reverse costing, and discussions with the companies