What if your clamp meter or a multimeter has infrared imaging to tell you where exactly the printed circuit board or in a electrical panel wiring, you can spot heat generating areas to help you design a better system or find a faulty component/device. Though there are plenty of infrared camera based measuring instruments, it's hard to find a multimeter fitted with infrared imaging camera for test and measurement purposes. The new FLIR CM174 clamp meter from FLIR with built-in thermal imaging helps in finding faults such as intermittent connections by seeing the faulty area through infrared eye which captures the temperature on the surface in image form and displays that on a built in 2 inch TFT LCD with 480-pixels resolution. To give an example of fault which can be caught through thermal imaging: the power supply unit of a system might be fine but heating up due to faulty load or abnormal operation of the load or a faulty wire, in such cases the load or a connecting wire is a culprit instead of the power supply unit. Infrared based instrument can help technician to spot the culprit by seeing the temperature variation instead of finding fault with wrong device. There are many such examples where temperature reading of area can help diagnose the problem. The FLIR CM174 senses temperature range of -25°C to 150°C. A built-in laser and cross hairs guide the user to items in the field of view. The clamp meter part of CM174 supports measuring of currents up to 600A at voltages up to 1000V and also extendable to a range of 3000 Amps AC with FLIR FLEX accessories . Clamp measurement modes include True RMS, LoZ, VFD Mode, Inrush, and Smart Diode with Disable. FLIR Systems also made available all-in-one digital multimeter with a built-in thermal imager powered by FLIR's Lepton thermal micro-camera core. The multi meter functions available in DM284 includes 18-function industrial True RMS digital multimeter with FLIR's IGM technology. FLIR CM174 is immediately sold by leading distributors. The FLIR DM284 is also expected to be available from leading distributors by the end of 2016. 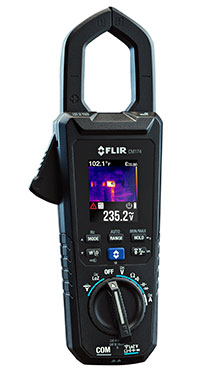 Student
View and share your Tek scope' waveform on the cloud

Test-measurement
Oscilloscope family from R&S for development of embedded ...

Test-measurement
Rugged digital multi meters for both maintenance and R&D ...

Test-measurement
Not so high priced vector signal generator from Tektronix

Test-measurement
Red Pitaya and SmartScope makes your smartphone or tablet...

Batteries
Lithium-ion battery can be tested within in a minute

Test-measurement
Single platform for emulation and verification of communi...