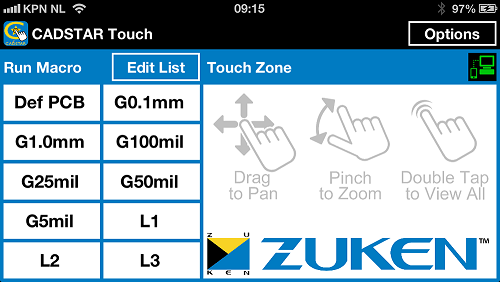 Ian Broughton, Senior Electronics Design Engineer, C-TEC says: "There are some real benefits to be gained from using this App - especially the numerous small time savings and the ease-of-use that it offers. As long-time users of CADSTAR, we are pleased to see the continual progression of the software and that Zuken has been quick to adopt apps, making use of devices that are now part of everyday life."

The Mobile app which supports iOS or Android based mobile devices uses Wi-Fi connection to communicate with your PC. Android users can also control the program through voice commands. Features offered include: pinch to zoom, drag to pan and double tap to view all. Designers can customize the App to give quick access to user-defined macros for the CADSTAR functionality and sequences they use most often, thus saving time.

CADSTAR Touch can be downloaded for free from Apple and Google's online store.

The Activ-45 router helps in routing through densest areas of a design by using enhanced pusher technology, the route path will follow the cursor with minimum disruption of existing routing patterns.

The Activ-45 router makes space for new lines of collection by pushing existing routes and vias aside by following the design rules. If necessary it can flip existing routes over pins and pads to create even more space, such as when creating a BGA fan-out. At any point before completing the route, if the cursor is moved back towards the starting point, the routes will spring-back to their original position.

Software
Voice control your embedded systems with 20 lines of soft...

Software
A new OS for IoT

Software
XJTAG releases of Ver 3.4 of its development system

Software
RTOS for your low power microcontroller based IoT embedde...

Software
Latest version of its static analysis tool from AdaCore

Software
UMC to offer ARM Artisan physical IP and POP IP in its 28...

Software
Free PCB and mechanical design software from a component ...

Software
8051 code compatible processor IP both in Von Neumann and...

Software
SpeedBridge Adapter for PCIe 3.0 to speedup designs in pr...

Software
Memory and logic libraries for optimal design of SoC

Software
Powerful PCB library tools from IPC to support users of I...

Software
App for using formal methods for the verification of low ...

Software
Software from CEVA for seamlessly offloading tasks from C...