Researchers at Rice University have come up with a new way to boost the efficiency of the ubiquitous lithium ion (LI) battery by employing ribbons of graphene that start as carbon nanotubes. 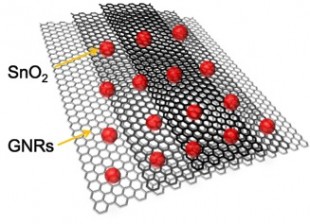 Graphene nanoribbons split from nanotubes in a process created at Rice University are now being used to improve the performance of lithium ion batteries. The nanoribbons in a solution with tin oxide have more than double the capacity for lithium than standard graphene anodes in current commercial batteries. Image courtesy of the Tour Group

Proof-of-concept anodes — the part of the battery that stores lithium ions — built with graphene nanoribbons (GNRs) and tin oxide showed an initial capacity better than the theoretical capacity of tin oxide alone, according to Rice chemist James Tour. After 50 charge-discharge cycles, the test units retained a capacity that was still more than double that of the graphite currently used for LI battery anodes.

The research appeared this week in the American Chemical Society journal ACS Nano.

Better batteries are greatly desired by everyone who carries a cellphone or computer or drives an electric car. The Rice team sees the potential for GNRs to contribute to their development.

Tour and his colleagues developed a method for unzipping nanotubes into GNRs, revealed in a 2009 cover story in Nature. Since then, the researchers have figured out how to make graphene nanoribbons in bulk and are moving toward commercial applications. One area ripe for improvement is the humble battery. In an increasingly mobile world, battery capacity is becoming a bottleneck that generally limits devices to less than a day’s worth of use.

Islands of tin oxide ride alongside a graphene nanoribbon (at top) in a slurry used in anodes for lithium ion batteries. The 10-nanometer tin oxide particles are kept separated by the nanoribbons, which are created by splitting multiwalled carbon nanotubes. Image courtesy of the Tour Group 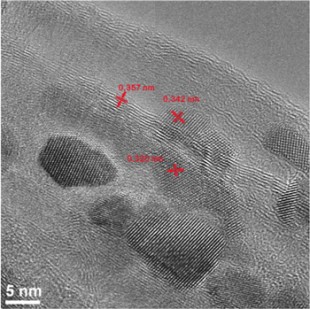 In the new experiments, the Rice lab mixed graphene nanoribbons and tin oxide particles about 10 nanometers wide in a slurry with a cellulose gum binder and a bit of water, spread it on a current collector and encased it in a button-style battery. GNRs are a single atom thick and thousands of times longer than they are wide. The GNRs not only separate and support the tin oxide but also help deliver lithium ions to the nanoparticles.

Lab tests showed initial charge capacities of more than 1,520 milliamp hours per gram (mAh/g). Over repeated charge-discharge cycles, the material settled into a solid 825 mAh/g. “It took about two months to go through 50 cycles,” said lead author Jian Lin, a postdoctoral researcher at Rice, who believes it could handle many more without losing significant capacity. 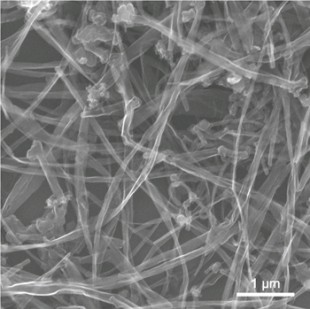 GNRs could also help overcome a prime difficulty with LI battery development. Lithium ions tend to expand the material they inhabit, and the material contracts when they’re pulled away. Over time, materials like silicon, which shows extraordinary capacity for lithium, break down and lose their ability to store ions. Other labs at Rice have made breakthroughs that help solve the expansion problem by breaking treated silicon into a powder, achieving great capacity and many cycles.

Long ribbons of carbon that are only one atom thick may help improve lithium ion batteries, according to researchers at Rice University. They combined the nanoribbons with tin oxide nanoparticles to make high-capacity anodes. Image courtesy of the Tour Group

GNRs take a different approach by giving batteries a degree of flexibility, Tour said. “Graphene nanoribbons make a terrific framework that keeps the tin oxide nanoparticles dispersed and keeps them from fragmenting during cycling,” he said. “Since the tin oxide particles are only a few nanometers in size and permitted to remain that way by being dispersed on GNR surfaces, the volume changes in the nanoparticles are not dramatic. GNRs also provide a lightweight, conductive framework, with their high aspect ratios and extreme thinness.”

The researchers pointed out the work is a “starting point for exploring the composites made from GNRs and other transition metal oxides for lithium storage applications.” Lin said the lab plans to build batteries with other metallic nanoparticles to test their cycling and storage capacities.

Co-authors of the paper are Rice graduate students Zhiwei Peng, Changsheng Xiang, Gedeng Ruan and Zheng Yan and Douglas Natelson, a Rice professor of physics and astronomy and of electrical and computer engineering. Tour is the T.T. and W.F. Chao Chair in Chemistry as well as a professor of mechanical engineering and materials science and of computer science at Rice.

Boeing, the Air Force Office of Scientific Research, Sandia National Laboratory and the Office of Naval Research supported the research.

Batteries
Supercapacitors to power your IOT

Batteries
Lithium-ion battery can be tested within in a minute